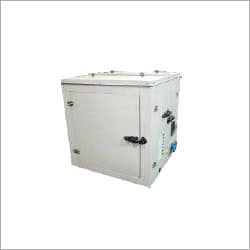 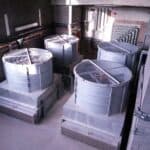 Spiro Gills have a long history of supplying fin fan design heat exchangers globally. They use HTRI and modern CNC machines to manufacture their coolers to the highest standard.

Forced draft heat exchangers push air through the fins of a tube bundle. The tubes are staggered in an array that forces air to travel around each tube and through the finning material. In most cases the finned tube is made of steel or stainless steel while the fins are applied in aluminium or copper.

Forced draft air cooled heat exchangers are not only cheaper to manufacture but also in many cases cost less to maintain. Namely because the drive gear, belts and fans themselves are not exposed to heated exhaust air. This in turn results in a longer mechanical life.

This design of heat exchangers are in many cases easier to maintain and repair due to ease of access to motors, drive gear and fans when compared with an induced draft cooler in the same location.

The primary advantage of a forced draft unit is cooling efficiency. The fan has the ability to draw cool air from below the unit and bend the air through the fins and over the tubes in the bundles. A disadvantage is the potential to not cover the entirety of the tube bundle with cool air. The fans will have a greater cooling effect on the tubing directly above the fans blades. Increasing the number of fans or the dimensions of the fan blades can mitigate this effect.

Subscribe to our newsletter to receive additional deals and promotions.

No products in the cart.